Teaming up with customers to co-innovate (or even better with your fans, if you’re lucky to have them)

Once up on a time, apparently a business could not necessarily be “customer- centric”. If you think it’s so obvious any company or brand must have customers at the center of its decisions taking process, think again why the term “customer-centric” had to be coined in the first place.

The concept is still often more of a marketing trick or organizational aspiration than a reality, but nevertheless, increasing competition is making brands truly getting closer to customers. Some others are even going further: they are putting them at the heart of business decision-making.

When it comes to innovation they’re even asking them for help with the process, not just simply using them to provide insight. Consumer-led creativity does exist. Consumers are a huge and largely untapped source of creativity and innovation. Customers are already creating value and solving problems without any encouragement from commercial organisations. Why not trying to tap into it?

Co-creation workshops can help businesses pool ideas from participants and turn these insights into tangible prototypes that can be evaluated in real time. We could recently prove it once more when asked by F.C. Barcelona to lead its first co-creation workshop with members of the football club in order to work together in a process of proposals and ideas. Using the context of the recent Mobile World Congress, fifty F.C. Barcelona supporters between 18 and 40 years gathered in a workshop named ‘Smart & Mobile Connection Future’ to propose ideas linked to technological applications that could facilitate the living and sensing of everything the sport club is offering to its members, supporters and fans in the stadium and sports events.

Contributions and needs identified were numerous. For instance, it was proposed to make possible to watch game replays on the phone or tablet at the Camp Nou stadium itself in real time; and apps to order sandwiches and drinks from seats during the game or to access to information about public transport and traffic around the stadium. Some other proposals pointed to be able to carry a digital version club’s member card in smartphones that could also be used for mobile payments at shops and restaurants linked with F.C. Barcelona.

Co-creation workshop ‘Smart & Mobile Connection Future’ is part of a transversal innovation program started late last year with the aim to identify problems and opportunities for the organization and resolve them through new projects or ways of working. Some other workshops like this are coming soon and will be related to other areas of the club. 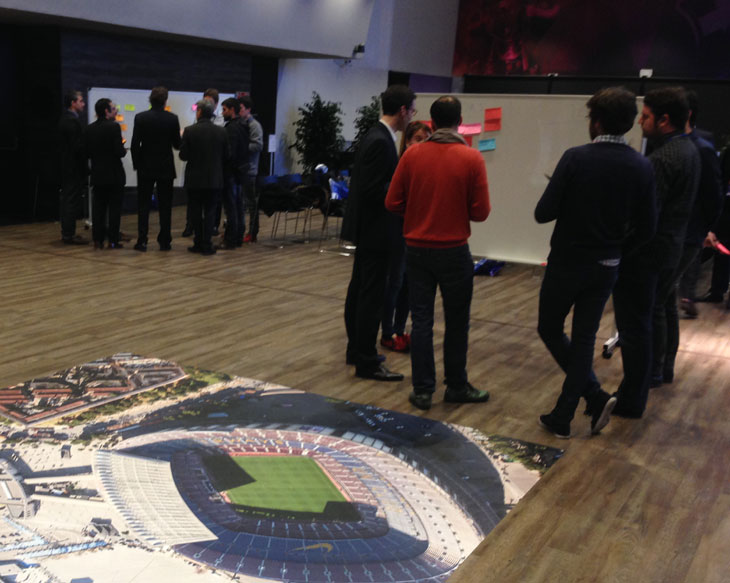