#29 Co-session: Build your own innovation space

In our last Co-Session of the season 2016-2017 we were in a new space of our own. We now have our own premises in the heart of Barcelona’s Poblenou neighborhood. This old industrial zone has been undergoing reconversion for several years now to become the city’s innovation district, a favorite location for new tech and knowledge companies. We have named the space “The Institute of Next”, and we want it to become a place where companies and organizations of all kinds can learn to change their “operating system” to be able to adapt to the different disruptions that will affect all sectors and types of company in the near future.

What better occasion than the opening of our new premises to dedicate this Co-Session to the subject of spaces for innovation? So this is what we did with the fellows of Co-Society, as usual, and this time we were also accompanied by a group of young students from the Summer School on Management of Creativity, organized by the HEC Business School in Montreal and the University of Barcelona, on tour around the city to explore its creative and innovation ecosystem in more detail.

Three people from different organizations explained us how their respective companies have addressed the issue of new spaces to innovate.

Creativity and innovation have not traditionally been words associated with banks. But now new types of customers, new ways of entering the market and new technologies provide a context of accelerated transformation that demands new ways of working in these financial institutions. Maria Santolaria, Venture Designer at Innocells, Banco Sabadell’s hub for new digital businesses, has witnessed the way in which initiating this change is held back. For example, and to start, she has seen the obstacles involved in creating a different space to that used for everyday tasks and duties, with a “Project Room” in which for the first time in the bank the walls were transformed into whiteboards to work on new ideas.

Having overcome teething troubles at first, this new space is now booked out several days in advance by different departments of the bank. Having changed the space has meant that many employees come up with a new way of thinking about things. The idea is for people who pass through the space to take this new mindset back to their usual work station. The whiteboard walls have now spread throughout the organization and, for the first time, everyone involved in the bank’s new projects can participate in the process from the very beginning. Implementing Innocells has led to a fivefold increase in this initial space for innovation.

For his part, Erik Grab, VP of Strategic Anticipation, Innovation & Sustainable Development of the Michelin Group, stated that they didn’t want to have their own spaces to innovate. He prefers instead to “hack” other spaces like a bus or a FabLab. His reasons: Erik works with different large corporations and considers that the fact that some of them invite others to work in their headquarters promotes greater knowledge between them and, therefore, better collaboration. For Erik, the important thing is the process, not so much the place. Each space can be used to deal with a different type of problem, so not having your own makes you adapt to each new challenge that needs to be worked on.

Anne Déroulède, Manager of Outdoor Concepts (Footwear) at Salomon, also learned from experience that the place where you innovate is of little use if you do not have the right processes. When the outdoor equipment company grew by opening different centers, it was felt that concentrating everything in a single new building would facilitate interaction between people and departments. This was not the case. For Anne, this creative interaction happens more efficiently in informal processes that take place outside the office, such as a business trip or at the company’s Christmas dinner. The space to innovate is, more than a physical space, a “mental space” outside the time and places where plans and strategies dominate. 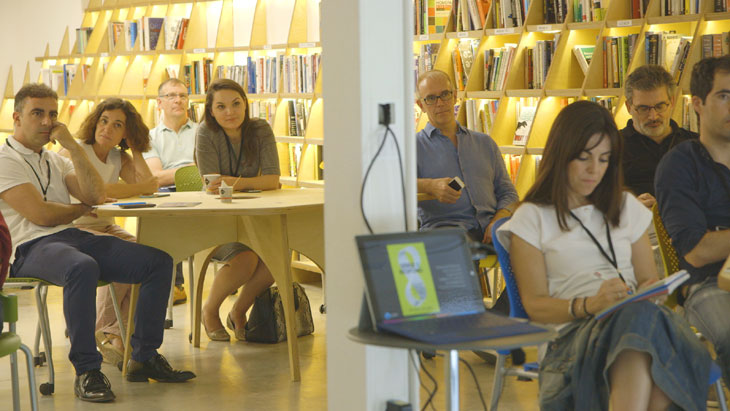 Montse Pareja, professor at the University of Barcelona and part of the School on Management of Creativity team, was responsible for summing up the ideas learned during the morning on spaces for innovation. Among other ideas, she reminded us that workspaces and creativity are changing because ways of working and creating are also undergoing the same process. There are many and varied approaches, and it is worth noting that there are specialized research groups on the subject, such as the Research Group for Collaborative Spaces.

These new spaces are the result of current changes in working environments such as an increasingly blurred line between work and personal life, or the need for more frequent adaptation to an increasing variety of requirements and types of projects. New forms of digital communication have not done away with the need for and the convenience of physical and face-to-face encounters when creating collaboratively. That said, we have to remember that the space for innovation is not only physical and that other elements such as processes, times and people should also be considered.