Co-Session #27 on AI for Business (II): Turning participants into neurons

As is usually the case at each of our events, there was also time in our Co-Session on AI for Business to work in groups. But this time we appropriately wanted to use AI to connect participants innovatively using a specially-developed algorithm which allowed us to see the “distance” or “closeness” between each of them considering the terms used in their LinkedIn profiles describing their professional and personal backgrounds.

The system, called Metric4Match, makes possible therefore to put together groups based on the potential opinions and perspectives of its members. The groups formed this way debated the question “What’s in AI for me?”, discussing about business opportunities offered to their respective sectors by Artificial Intelligence. Among the many potential advantages were those related to cost reduction and greater efficiency based on anticipation. They also discussed the prior needs of organizations to be able to make reality the promises of AI. The answers to this question included the need for more specialized professionals, more accessible tools, strategic management and focus in the longer term, and innovative business models capable of levering the new paradigms that Artificial Intelligence can create in new markets.

The coming era of quantum computing

The most scientific part of this Co-Session came from José Ignacio Latorre, theoretical physicist and partner of Entanglement Partners, “The Quantum Information Company”, who tackled the unenviable task of helping the uninitiated understand the principles and potential of quantum computing. From his presentation, we learned, for example, that the quantum computing revolution will leave today’s AI revolution standing, as it will exponentially multiply the current limits of traditional computing.

This will allow us, among other disruptive innovations, to break modern encryption systems, devise simulations of quantum physics, easily train neural networks, and multiply our current capabilities in drug design or the optimization of solutions to an infinite number of problems to an unheard-of degree. For Latorre, the main question here is not going to be so much when quantum computing will be available but into whose hands this type of technology is going to fall. This is a valid question if, as he himself states, being the first to have the know-how to run a quantum supercomputer brings about a situation similar to that of being the first to possess the atomic bomb.

Helping people understand the basic principles of computational “reasoning” that Artificial Intelligence is based on is no simple task. The original (and daring) way of showing participants of this Co-Session how neural networks work was to turn each one into a “neuron”. Working in groups of 5-6, this interactive workshop turned each table into a neural network that used the collective intelligence of its members to carry out a mission: using intuition to rank a series of polygons from the largest to smallest surface area (without the chance to do any measuring at all).

The best system is to work in a similar way to a neural network. An initial exercise was used to determine the skill of each member of the group in the task assigned. In the second, each member of the group individually ranked the polygons based on their surface area. But this time a joint ranking was made in which the final ranking was determined by a weighted mean according to the different weighting of each participant, determined by their results in the first exercise. The final result should show that the group-weighted ranking showed better results than the best of the individual rankings. The exercise helped people understand the importance of training and repetition in the functioning of neural networks. 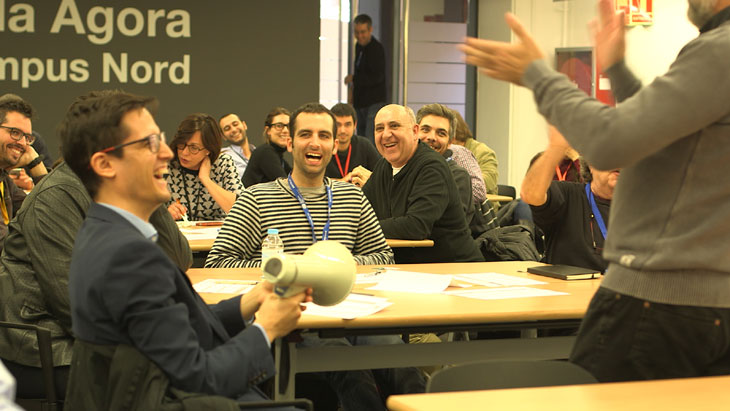 An open space for students

This conference on Artificial Intelligence ended by dedicating some time to research work being done in this field and, in particular, to several projects based on AI that are currently being carried out by students of the Polytechnic University of Catalonia (UPC). For example, Atia Cortés presented the i-Walker, a walking frame for the elderly that can learn the particular way in which each user walks. It is currently being used to work on predictive models that can alert of the risks of falling at a particular moment and recommend exercises to prevent falls and improve mobility.

Jonathan Moreno referred to the Tiramisu project in which he works with Cognitive Neural Networks to understand the way in which they cluster different images freely. Finally, Luis Oliva told us about Atalaya, a research project that is part of the European project Superhub to provide sustainable urban mobility services. Atalaya is a real-time data-capture system which uses mobile phones, applying the concept of a “human-as-a sensor”. In this case, Artificial Intelligence is used in predictive models that can detect certain events that have taken place in the city and interpret their possible development.