Co-Session#21 Science is Business (I): A much needed collaboration for a new economic model

Science and business are still not as inter-related as they should be. There is still too little dialogue between them. Co-Session#21 intended to encourage discourse that is still too much of an exceptional occurrence amongst scientific researchers and business people. An objective shared by the organisations hosting the event, the Barcelona Science Park and the Barcelona Institute for Research in Biomedicine. As the director of the research institute, Joan J. Guinovart, declared in his opening speech, “Our mission is not only to generate knowledge, but to turn it into benefits that will create a healthier and richer society.”

The physicist José Ignacio Latorre was determined to prove the link between science and business, or what is the same thing, between science and the thousands of products, items and materials that we use and observe every day. “I don’t believe that science should be focussed on the uses of its discoveries”, he claimed at the start of his presentation. A provocative and ironic statement, because we then discover how many of the latest technologies that make our lives easier, and that make up, directly or indirectly, aproximatedly 30% of advanced economies’ GDP (fibre optic, GPS, mobile telephones, magnetic resonance, etc) came from the discoveries made by quantum physics as it took off in the early 1900s. So to say useful science is a pleonasm, and the word useful redundant, even if we often have to wait for the usefulness to become evident. 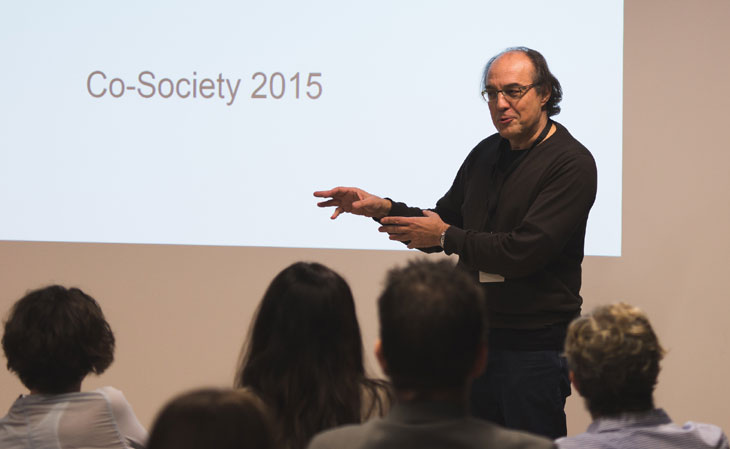 But actions speak louder than words. So we should look at the scientific research that is currently occupying six separate research teams at the Barcelona IRB. These are six perfect examples of what science can offer when we trust in its results.

Jordi Durán. We need glycogen to function properly, but if it becomes concentrated in certain quantities it can be harmful. Research into the pathological role of glycogen, and how its accumulation can cause the loss of neurons, could help us detect mechanisms that lead to a better understanding of rare neurodegenerative illnesses.

Meritxell Teixidó. Crossing the bridge from blood to the brain is still one of the main things preventing improved efficiency of many molecules that are destined to combat brain disorders. Research at the IRB is working to break through the barriers for periods of over 20 minutes in order to cause effects that last 24 or even 48 hours.

Raquel Batlle. The creation of a genetically modified mouse that is more sensitive to diseases of intestinal inflammation has improved tests involving therapeutic agents such as tumour inhibitors and even the discovery of foods that can prevent this type of inflammation.

Guiomar Solanas. A better understanding of how mother cells age in relation to the circadian processes that affect our physiology according to the time of day could mean the discovery of the key to delaying the effects of aging.

Ana Terriente. To be able to use the fruit fly instead of mice in certain clinical experiments could greatly improve research into JAK2 inhibitors, a protein whose mutation causes specific blood disorders.

Oscar Flores. Genomcare is a project that proposes a DNA information management system that could be used to obtain personalised treatment as well as to further genome research.

More actions to shout the words, in this case by businesses. And once again by science which has been transformed into business, which is to say into resolved problems, needs covered, and improved efficiency. Such as what Metalquimia has achieved, a specialist company in meat technology, which has succeeded in revolutionising the curing of meats, reducing the time needed from 40 days to 40 minutes, with a new process that utilises the latest research in biotechnology, genomics, robotics and even nanotechnology.

Scientific research was also the direction taken years ago by Rovalma, which allowed the development of steel that competes in today’s global market due to unique properties including high elasticity and thermal conductivity that were impossible to create just a few years ago. Nanotechnology is the science used by Goldemar to develop purifying air filters, which has made the company a leader in its field. Its founder and CEO, Ernest Mendoza, provides a personal example of the success of a professional and vocational scientist who, in his own words, went over to the “dark side” and launched his own company.

Perhaps less complex is the science used in the smart cushion developed by the Isidre Esteve Foundation, but technology that prevents pressure ulcers is no less celebrated by those who are forced to remain sitting or lying down immobile for long periods of time. Orbea did not invent the sensors that they fix to their bicycles with the purpose of carrying out an innovative research project, but they did have the foresight to use these technological advances to acquire a unique understanding of their market, which today they use to relate the sensations experienced by cyclists with the physical aspects of individual bikes and how they handle.

And lastly, Bound4Blue, today a start-up company in its first stages, but whose vision of using science as a catalyst for dreams puts it in another league. Their dreams are about to become a sustainable business, with a project born in the Aeronautical School of Terrassa that intends to revolutionise energy production with boats that produce hydrogen and oxygen through the electrolysis of sea water.