Another announcement on Collaboration from MWC14 in Barcelona, and one dealing with smarting cities, one of the areas where more co-innovation and co-creation will necessarily take place during next years.

The collaboration announced consist in Ericsson and Philips having developed a type of LED street light that comes bundled with a tiny mobile base station. The bundling, as odd as it may seem, is designed to solve two common urban problems at once: the mobile data explosion, and the increasing need for cities to cut their energy consumption. At the same time, the idea “coincides” with core businesses to both participants on the innovation, the Swedish telecommunications equipment maker and the Dutch electronics company.

The rise of the mobile device prompts a change in the way cellular carriers design their networks. People are nowdays using much more data than just few years ago (and much less than we will be using once 4G becomes mainstream).  The widely distributed scattering of large mobile masts is being the traditional setup that now can’t cope with new demands. So the current trend is towards network densification: smaller and more numerous access points that can serve more people and the gigabytes they want to use. But, where do you put them? Equipment makers like Ericsson are experimenting with all kinds of placements, and a lamppost is at the same time an efficient (about the ideal height), discrete (it does not add anything new to the usually overcrowded urban furniture setting and skyline) and economic (no real estate costs) solution.

On the other hand, Philips is all about smart lighting since some years ago, and municipalities are main prospects to sell its next-generation LED street lights. The main selling point of these streets lights are savings between 50 and 70 percent of energy needed by traditional sodium street lights. Those savings can go even higher if you add to LEDs smart controls as sensors able to monitor traffic density and make the street light react to it. So when Philips considered embedding connectivity into its lights, it was logical to think about what else could be done with that connection.

As usual, collaboration was born on a casual conversation between two decision makers. As the story goes, Philips CEO Frans van Houten and Ericsson CEO Hans Vestberg started talking lights a year ago, when they met at the World Economic Forum. According to Vestberg, what they came up with is an alignment of strategies that is “unique” for two giants the size of Ericsson and Philips. 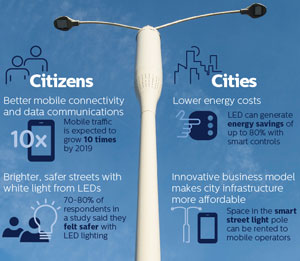 Philips and Ericsson to Use Streetlights to Expand Cellphone Coverage